In this tutorial I will be implementing Onion Architecture in ASP.NET Core with CQRS. You can download the complete source code from my GitHub Repository.

What is Onion Architecture

See the below image illustration of the Onion Architecture. Layers in Onion Architecture for an ASP.NET Core app

You must have question like – What are the main layers of Onion Architecture and how they communicate with one another. These questions answers will be answered in this section.

In your ASP.NET Core app, Onion Architecture can be created with 3 layers. These are:

At the center, there is Domain Layer which is not dependent on any other layer. The Domain layer contains Entities which are common throughout the application and hence can be shared across other solutions to. Suppose you are building an app for a School so you will probably add entities like Student, Teacher, Fees classes in the Domain layer. Got the point?

For the School app, we may add an interface dealing with database operations for the entities like Student, Teacher and fees. This interface can be implemented in the outer Infrastructure Layer where the actual database operations are added. This is also creating the Dependency Inversion Principle.

The Domain and Application layers are together known as Core layers of Onion Architecture.

The Infrastructure and Presentation Layers are outermost layers of Onion Architecture.

In the Infrastructure Layer we add infrastructure level codes like Entity Framework Core for DB operations, JWT Tokens for Authentication and other such works. All the heavy task of the app is performed in the layer.

The Presentation Layer will have a project which the user will use. This can be a project of Web API, Blazor, React or MVC type. Note that this project will also contain the User Interfaces.

The data access layer usually contains ORM like Entity Framework core or Dapper. When creating n-tier architecture the layers depend on each other, and we end up building a highly decoupled structure. This defeats the purpose of a Clean Architecture.

Start by creating a Blank Solution in Visual Studio.

Name it as OnionApp or something else.

In the blank solution add 3 folder which will serves as the layers for the Onion Architecture.

The 2 most popular tutorials are: Name the project as Domain.

Note that we have to change the target framework to .NET Standard 2.1 which is the latest version right now. You do this by right clicking the domain project and select properties, then on the window choose the 2.1 edition as I have shown in the below image.

Don’t forget the press CTRL+S key to save the changes.

One thing I like to explain further. This is that you can have any type of library project on the Domain layer as this layer is independent of other layers. This is the reason I chose .NET Standard, you can choose .NET Core if you wish to have it. Name this project as Application.

Now add a class called Student.cs in the Domain project. You can do this by right clicking on the project name in solution explorer and select Add ➤ New Item. On the item’s list, choose “Class” and Name is “Student.cs”. The Student.cs class is shown below. It is a fairly simple class containing just 3 properties to describe a student.

We have an entity called Student, this entity should be mapped as a class for Entity Framework Core. This we all know is done by Data Context class. But here we won’t be doing this instead we will add an Interface that will contain Entity Framework Core logic. This interface will be implemented on the Infrastructure layer and so EF codes does not fall under the Application Layer, but goes to the Infrastructure layer which is outside the core.

At some later time if we decide to have a different implementation of this interface then we just have to change the implementation part which lies on the infrastructure layer. We don’t need to touch the application layer at all. This way we can build scalable applications.

First add reference of the Domain Project in this project. Right click on Application project and select Add ➤ Project Reference A new window will open. On it’s left side you will see Projects option, select it, then on the middle section you will see the Domin project. Select the checkbox for the domain project and click the OK button. This will add the Domain project’s reference to the Application project. Next, from NuGet Package Manger, install the Microsoft.EntityFrameworkCore package to the Application project.

You can also add the Entity Framework Core package by running the command Install-Package Microsoft.EntityFrameworkCore on the Package Manager Console window of Visual Studio. Remember to select the Application project from the “Default project” dropdown. Check the below image.

Now add a new interface on the Application project and call it IAppDbContext.

Now we will add Command Query Responsibility Segregation (CQRS) pattern. This pattern specifies that different data models should be used to for updating / reading the database. I have written a descriptive CQRS article – Implementing ASP.NET Core CRUD Operation with CQRS and MediatR Patterns, you will find this article very helpful.

Start by adding the MediatR.Extensions.Microsoft.DependencyInjection NuGet package to the Application project. Then create a new folder and name it CQRS, inside this folder create 2 new folder that will hold Queries and Commands classes. Name these folder as “Queries” and “Commands”. Check the below image. Next, inside the Commands folder add CQRS classes for commands, these are:

Now, inside the Queries folder add CQRS classes for queries, these are:

These classes will implement the CQRS pattern and will perform database CRUD operations for the Student entity. As you may have already noticed, they are using Entity Framework Core for performing database operations. You can these classes in the below image. We now will create an extension method to register MediatR library which can be done by adding a class called DependencyInjection.cs. The code of this class is given below:

We will be calling the method AddApplication from the startup class when we will create the Presentation layer.

We now will move to Infrastructure layer. Next, perform a couple of things which are:

1. Change it’s target framework to .NET 5.0 which is the latest version right now.

2. Add project reference for the Application project we build earlier.

In this project we will setup Entity Framework core which will access the CRUD operations performed by CQRS. Recall, we already created CRUD operations on the Application project.

Note that we will be using this layer to perform Migrations and Generate our database. We will see this in just a moment.

Remember we created an IAppDBContext Interface in the Application Layer? Now it’s time to implement it. So add a new class AppDbContext.cs to the Persistence project and implement IAppDBContext as shown below.

With our infrastructure layer complete, we are ready to generate the database. But there is a catch, EF Core migrations can only be run from a project which has Startup.cs class therefore we can only run the migrations from the Web API project of the Presentation layer.

Now coming to a very important part which is how the dependency of IAppDbContext will be resolved and how EF Core will pic the database during migration? The best way is to create an extension method in our “Persistence” project and we will call this method from the Startup class of our Web API project. So, create a new class called DependencyInjection.cs which contains this extension method. The code of this class is given below.

Clearly see that we are telling EF Core to get the connection string from DefaultConnection node of aspsettings.json file.

And the appsettings.json file should be searched in the assembly called “WebApi”. This also means our Web API project should be named as “WebApi”.

Now let us move towards the final layer which is the Presentation layer.

Start by add an ASP.NET Core Web Application project in the Presentation folder. Name it WebApi (do you know why? See the extension method we created earlier). On the next screen, which asks to select the template, make sure you select the ASP.NET Core Web API template for the project, and next click the create button. Since this project will be calling the component of the “Application and Persistence” projects so make sure you add the project references to these 2 projects in your WebApi project.

Now open the appsetting.json file and add the connection string for the database.

Here, I have name my database as OnionAppDb.

Next open the Startup class “ConfigureServices” method and call the 2 extension methods which we created earlier.

These extension methods registers MediatR and adds dependency injection middleware. This is shown by the highlighted code below.

To the WebApi project add the below package which helps in performing migrations.

Now open Package Manager Console window and navigate to the WebApi folder. This is done because migration commands must be run from the folder containing the Startup.cs class.

Use the “cd” command to navigate to this folder:

Now run the following 2 EF core migration commands one by one.

I have shown them in the below image. The commands will create a “Migrations” folder in the WebApi project and database in the MSSQLLocalDB. Navigate to View ➤ SQL Server Object Explorer

in Visual Studio and you can see this newly created database with just one table called “Students”. Next we will create Web Api controller for making HTTP Request for doing CRUD operations.

We now will create Web API Controller which will make HTTP requests to the CQRS classes we created in Application layer. So, add a new controller to the Controllers folder and name is HomeController.cs. Now add the following code to it. Swagger comes pre-configured in the Web API template. So run the app in Visual Studio and you will see the Swagger screen. It will show all the Web API methods we created. In the Request Body add the name, standard and rank of the student as shown below and then clicking the execute button. You will see success response with the created student id in the response body. This will be 1 since it is the first record which we created. Now click the GET button on Swagger page to test the Read functionality. You will see all the students records in json. Next click the PUT button on the swagger page. We will now update the first student record. So on the “Id” field enter 1 which is the id of the student, and on the request body change the name, standard and rank values of the student, see below json. You will see the student’s json is updated with the new values.

Finally check the DELETE functionality which I leave it to yourself.

I hope this Onion Architecture guide is easy for you to understand. I can say that it will make you fully ready to develop enterprise type apps on this architecture. Also make sure you download the codes from my GitHub repository whose link is shared in the beginning of this tutorial. Enjoy and happy coding!

I am Yogi S. I write DOT NET artciles on my sites hosting.work and yogihosting.com. You can connect with me on Twitter. I hope my articles are helping you in some way or the other, if you like my articles consider buying me a coffee -

Related Posts based on your interest 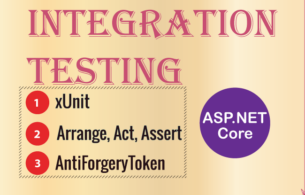 How to perform Integration Testing in ASP.NET Core